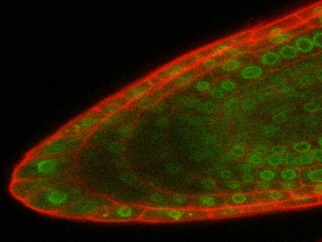 The Nuclear Pore Complex (NPC) is a large macromolecular complex that facilitates the active transport of molecules between cytoplasm and nucleus as well playing a significant role in cell division. One third of vertebrate NPC proteins reside within the vNUP107-160 complex. The developmental importance of this complex is highlighted in studies performed in Xenopus showing that removal of the complex results in NPC-less nuclei.
At the present time almost no empirical work has been conducted to elucidate the specific members of the plant NPC. Sequence searches have discovered that Arabidopsis contains orthologs of most vNUP107-160 complex members including the previously characterized AtNUP160 and AtNUP96 proteins (see previous work). Plants lacking AtNUP160 and AtNUP96 exhibit a pleiotropic phenotypes and rarely survive past the seedling stage demonstrating the critical developmental importance of these proteins.Expression of 35S-NUP96:GFP in the root tip

The work in the lab focused on a number of strategies to characterization plant NPC. In 2014 we published a manuscript in the Journal of Experimental Botany that can be downloaded below: