During my initial post-doc years I had the excellent experience of working in the lab of Professor Mark Estelle before moving on for a short period in Scott Michaels lab. My time in the very successful Estelle lab taught me the necessary skills to become a successful researcher and scientific leader. My research in the lab was separated into two different 'post-docs' as I undertook two distinct and largely unrelated projects. Initially I investigated the functional relationship between the auxin response and the nuclear pore complex. More recently and following the identification of the auxin receptor in Arabidopsis I investigated the functional differences between members of the critically important auxin receptor family.

Auxin and the Nuclear Pore Complex 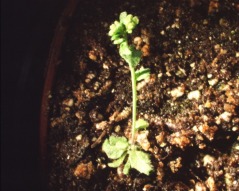 Sar1 and sar3 single mutant plants have a modest phenotype but I discovered that sar1sar3 seedlings have a severe developmental growth phenotype . In these plants both messenger RNA and an AuxIAA protein are incorrectly retained within the nucleus which would result in a wide array of developmental defects. This is the work I took on with me to when I started my new lab at Liverpool University.

Elucidating the role of the Arabidopsis Auxin receptor 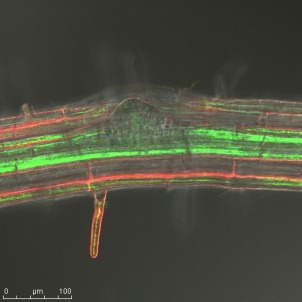 The TIR1/AFB auxin receptor gene family contain four closely related proteins. Reducing the number of each of these proteins in Arabidopsis results in increased resistance to exogenous applied auxin. Ultimately a high proportion of triple tir1afb2afb3 and quadruple tir1afb1afb2afb3 seedlings are lethal, being unable to proceed past the early seedling stage. My research involves investigating the contribution of each family member in the seedlings response to auxin.

The role of the microRNA393

MicroRNAs are a small RNA species that can control the expression of protein coding genes. The miR393 has been shown to influence the function of the TIR1/AFB gene family in the plants response to bacterial infection (Navarro et al, 2006). My studies suggest that miR393 plays a subtle role in the control of the auxin response. However the expression domain of miR393 suggests that it is involved in the events that control lateral root development.

GFP expression driven by the miR393 promotor in a cell file surrounding an emerging lateral root.

The hormone auxin is transported through plant cells through the activity of influx and efflux carrier proteins. During my PhD I studied the role the novel chemicals 1-NOA, CHPAA and Naproxen play in the inhibition of these carrier proteins.

My research showed that 1-NOA and CHPAA could phenocopy the influx carrier protein mutant aux1 whilst Naproxen acts as a highly specific auxin efflux inhibitor. The identification of the role of 1-NOA compound has allowed subsequent research into the role auxin transport in meristem development. 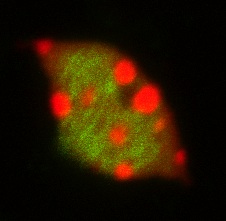 Following my time in the Estelle lab I joined the lab of Dr Scott Michaels also in the department of Biology at Indiana University. Members of the lab previously demonstrated that the ATXR5 and ATXR6 proteins play an important role in maintaining the heterochromatic state of DNA by controlling H3K27 monomethylation. Removal of these proteins results in decondensation of chromo-centers and reactivation of silenced transposons (Jacob et al, 2009, Nat Struc Biol).

The picture to the left shows chromocenter (red) and H3K27me1 (green) staining in the leaves of ATXR5 OX nuclei.

The precise mechanisms by which ATXR5 and ATXR6 act remains elusive. My project investigated  the mechanisms by which these proteins function and involved studying histone modifications, expression patterns and involvement of small RNAs in the regulation of many genetic elements. This used both conventional molecular biology techniques as well as whole genome analyses. During this time I learnt a range of new skills that were of great benefit as I started to develop my own independent research.